Research in the Speech Disorders & Technology Lab (SDTL) is highly interdisciplinary with a focus on motor speech disorders and assistive speech technologies. Those topics are across several disciplines including speech science, motor speech disorders, neuroscience/neuroimaging, computer science, biomedical engineering and electrical and computer engineering. Specifically, the research topics in the lab are, but not limited to, below:

Decoding speech from Neural (MEG) Signals for Individuals with ALS

Direct decoding of speech production from neural signals has potential to enable a faster communication rate for patients who are in locked-in state (fully paralyzed, but aware) than current word spelling based brain-computer interfaces (BCIs).  This project aims to decode imagined and spoken speech from non-invasive neural signals. Magnetoencephalography (MEG) uses highly sensitive magnetometers and gradiometers to record the magnetic fields associated with intracellular post-synaptic neuronal current transmission in the brain, which yields a higher spatial resolution than EEG and a higher temporal resolution than fMRI. We have recently demonstrated the possibility to decode a small set of imagined and spoken phrases from MEG signals with accuracy higher than 90% for healthy controls (Dash et al., Front. Neuosci. 2020) and up to 85% for individuals with ALS (Dash et al., Interspeech 2020).

Fingerprint in the Brain:  Speaker identification from neuromagnetic signals

Brain activity signals are unique biological features for persons that can neither be stolen nor be forged, hence hold promising inferences for next-generation biometric identifiers. In this study, we investigated magnetoencephalography (MEG) signals for speaker identification using data obtain from eight speakers. MEG records the magnetic field induced by the postsynaptic current from the cortical surface neurons with a higher spatial resolution. Besides resting state, we also experimented on speaker classification from the brain activity signals during speech tasks. Speech is an inherent trait of the speakers, and hence may be more helpful for high performance identification.  Results show the speaker identification was up to 100% using the data from the best two MEG sensors during speech tasks.  Using the data in rest state, data from the best nine sensors are needed to reach 100% accuracy (Dash et al., Interspeech 2019). 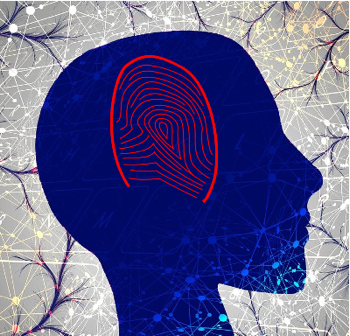 There is no biomarker and thus no currently definite diagnostic procedure for ALS. The current diagnosis of ALS is provisional, based primarily on clinical observations of upper and lower motor neuron damage in the absence of other causes. Considering the rapid progression of ALS,  ealry diagnosis is particulaly critial for ALS.  This research aims to  advance the early diagnosis of ALS using speech informationn (both acoustic and kenametic data) and machine learning.  Preliminarey results indiated the approach is promosing (Wang et al. ,2016;  An et al., 2018).  This research is featured in a commentary article in Nature Outlook (Salvage, 2017).

To better understand the general articulatory distinctiveness of vowels in different speech conditions (normal, whispered, and silent),  a novel, robust approach called articulatory vowel distinctiveness space (AVDS) was used to generate a space that is based on the general kinematic pattern difference (rather than direct tongue and lip displament/positions).  See the AVDS below, where silent vowel space is smaller than whispered space, which is smaller than normal (voiced) space.  This finding suggests silent and whispered vowel production are less distinct than voiced vowel production without vocal fold vibration (Teplansky et al., ICPhS 2019). 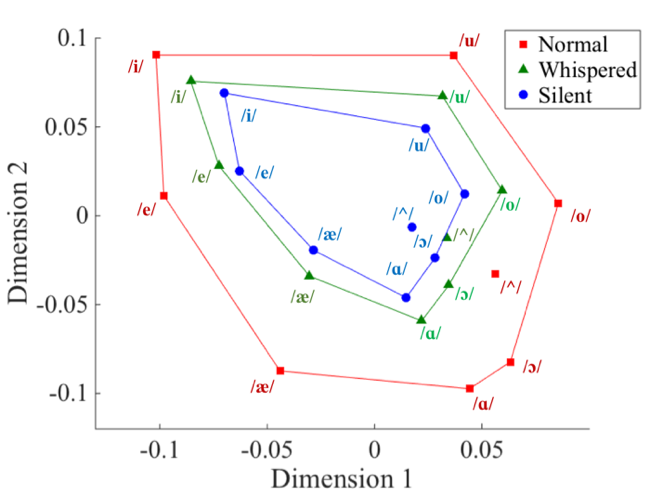 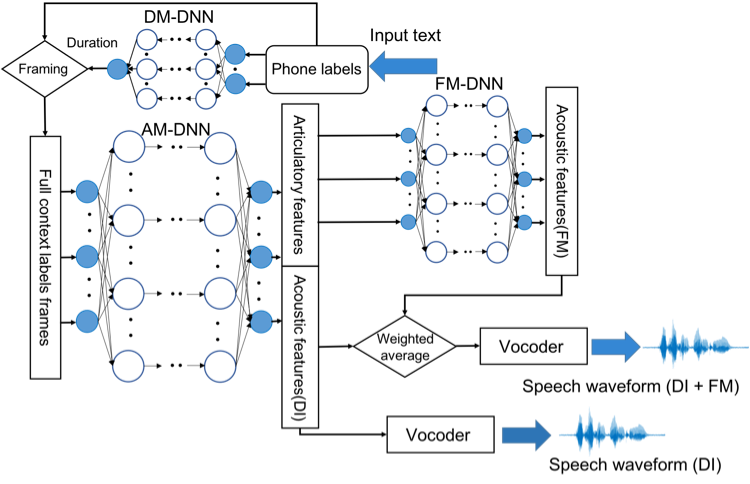 DJ and his Friend: A Demo of Conversation Using the Real-Time Silent Speech Interface

Demo of Algorithm for Word Recognition from Continuous Articulatory Movements

In the demo below, the top panel plots the input (x, y, and z coordinates of sensors attached on the tongue and lips); the bottom panel shows the predicted sounds (time in red) and actual sounds (time in blue). This algorithm conducts segmentation (detection of onsets and offsets of the words) and recognition simultaneously from the continuous tongue and lip movements (Wang et al., Interspeech 2012; SLPAT 2013).

Demo of Algorithm for Sentence Recognition from Continuous Articulatory Movements

In the demo below, the top panel plots the input (x, y, and z coordinates of sensors attached on the tongue and lips); the bottom panel shows the predicted sounds (time in red) and actual sounds (time in blue). This algorithm conducts segmentation (detection of onsets and offsets of the sentences) and recognition simultaneously from the continuous tongue and lip movements (Wang et al., ICASSP 2012). 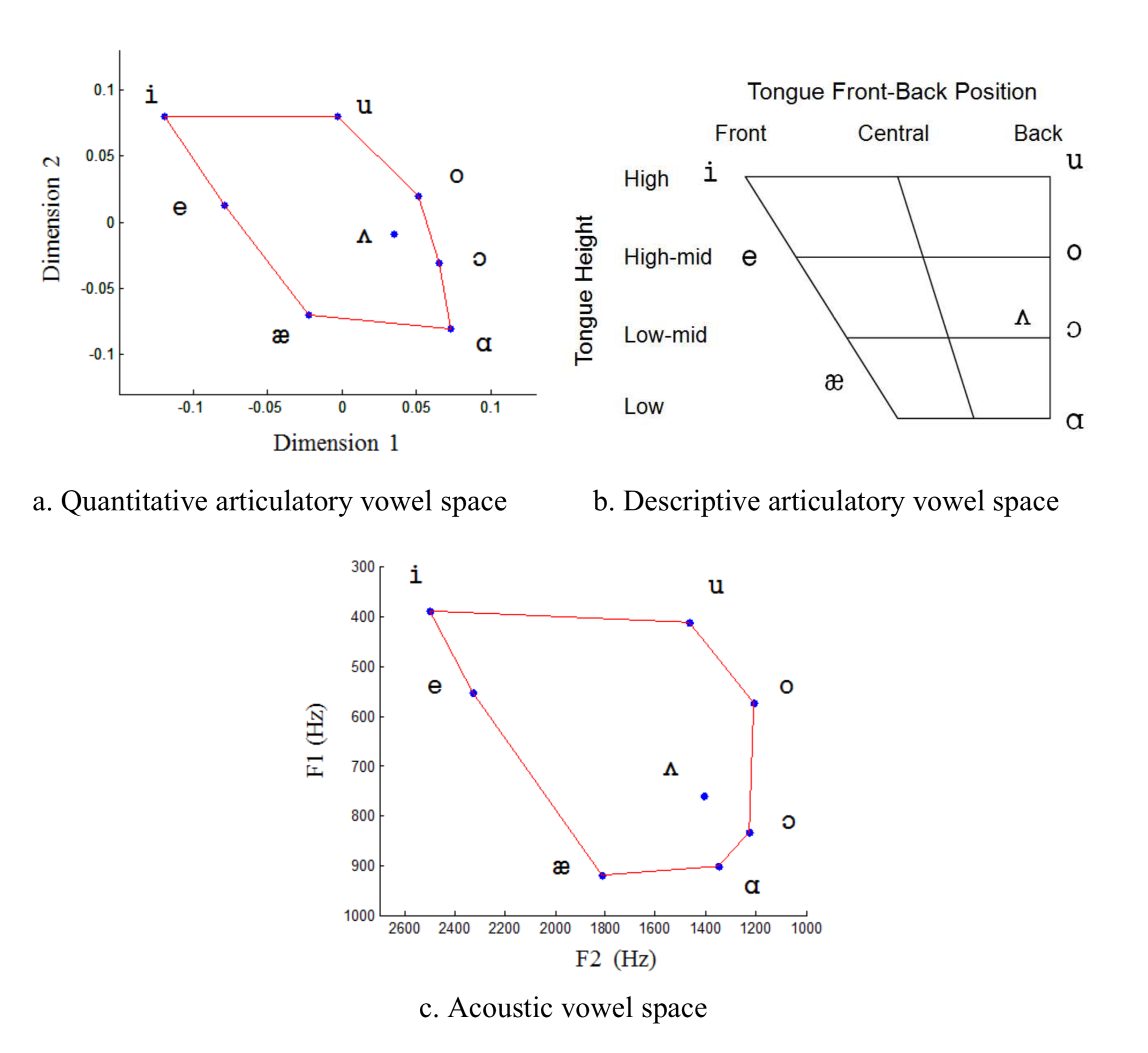 This is a collaborative project with MGH, U of Toronto, and UT Dallas, where where SDTL focuses on the articulatory sub-system of ALS bulbar system (Green et al., ALSFD 2013;  see a test protocol video on the Journal of Visualized Experiments). 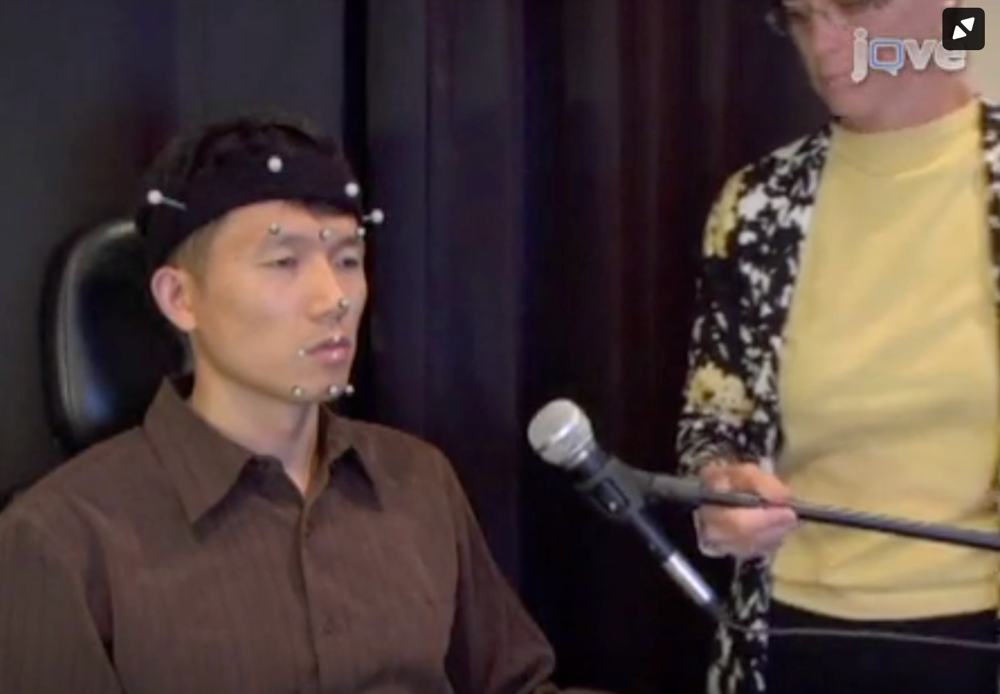